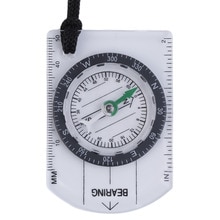 Mortimer Frank looked down at the crumpled paper in his hand. The numbers stared back at him, but none of it was making any sense. He scratched his head with the compass in his other hand and looked at the paper once again:

He could hear his cousin Annabel counting paces in the orchard, while he still stood on the front porch trying to figure out how the compass worked. "Why did Uncle Simon put us up to this?"

He turned the dial on the compass to 280 and started rotating the compass until north lined up with the floating arrow inside. The gravel driveway crunched under his feet as he began counting his paces. "Five feet per pace, so 30 paces should do it," he thought. Every ten paces he rechecked his bearing. He was marching west across the front of the mansion into the orchard.

Mortimer ended his march under a large apple tree full of fruit. From here he could see Annabel marching out the other end of the orchard, but much further to the west than he had stopped. Doubt crept into his mind and his face turned red. Had he not counted out his paces correctly? He checked the paper again, and almost went back to the porch to start over. She was so far ahead though... His stomach gave a lurch, if he lost again, it would be the third time in a row. What Should he do?

Ignoring the knot forming in his stomach. Mortimer spun the dial to 180 and held the compass out in front of him. He squinted as he lined up the needle and took his bearing. "Straight toward the open field," he thought, "No landmarks..." He would have to trust the compass completely. 400 feet... 80 paces... he would end up out in the open field, if he lost count, or his bearing he would have to come all the way back to this tree and start over. Simon wasn't messing around this time!

Mortimer looked up and was surprised to find Annabel standing stark still, staring at the pond. Had she messed up one of her bearings? Or miscounted her steps? Mortimer took courage and carefully turned the compass to the next bearing. As he held the compass out and began rotating to line up the needle Annabel flew past him toward the house, and Mortimer watched as she disappeared around the corner back to the front of the house. Was she STARTING OVER? Mortimer began to sweat. If he kept up this pace he would certainly win!

By the time he counted out his 40 paces and stopped near the boathouse, Annabel was emerging from the orchard. How did she move so fast? She stopped in almost exactly the same place he had just left. Panicking, Mortimer glanced at the paper and spun the dial to the last bearing. He started counting out paces at a furious pace. He was headed back into the orchard, and stopped at 40 paces, under a twisted peach tree.

Annabel had stopped next to the gazebo and started searching around the latticework base. Again doubt crept into his head as he watched Annabel through a gap in the branches. Had HE miscounted his steps? He sat down on a branch and pulled the compass and paper out of his pocket. The compass was still set to 290 degrees, but as he looked at the distance his heart fell. 180 feet was only 36 paces and he had gone 40!

Mortimer jumped out of the tree and stumbled as he landed in the tall grass. His foot hurt as he started counting four paces back toward the gazebo. As he reached Annabel's side she pulled a small wooden box from under the gazebo and undid the latch. Inside was a small golden ring with a single green gemstone set into it.

Mortimer was stunned. His head began to swim in disgust with himself. He had walked right past it! So bent on beating Annabel he hadn't looked at the distance on the last bearing properly and had gone too far, leaving the door wide open for Annabel to beat him again!

Simon walked out onto the lawn from the greenhouse clapping his hands.

Annabel ran to Simon and threw her arms around him. "Oh Uncle Simon, it's beautiful!"

Mortimer could not speak and turned away. He was still fuming at his slip up when a large hand grabbed his shoulder.

"Tough loss, son?" Simon whispered as he knelt down beside him.

Mortimer rubbed his eyes on his sleeve and was surprised to find they were wet.

Simon looked him in the eye and studied him carefully.

"You were well in the lead until that last bearing. Annabel had to start over when you were almost done. What happened?"

Mortimer shook his head and shrugged his shoulders.

"I don't know, I guess I just got so flustered that I was going to win that I didn't read the last bearing properly."

"I don't want to play any more." Mortimer blurted out, before he could stop himself. "She always wins! I'm no good. Even with that much of a head start she still beat me!"

"Mort, it's okay. Every puzzle is a new challenge, I know you will win one soon!" said Simon.

"Not with an attitude like that!" said Annabel examining the ring on her finger.

"Well, it's true!" Annabel said, "Mort needs to fix his attitude if he wants to beat me!"

"Anna, please! That's not a very good attitude either!" Simon said in a firm but gentle voice. He turned to Mortimer, "Come on, let's go inside and see what Marie has made for lunch!"

Mortimer allowed himself to be guided back inside by Simon, but he avoided eye contact with Annabel. Annabel, who apparently had nothing more to say to him, pranced through the green house ahead of them proud that she had won yet another one of Simon's puzzles. His cousin's hair was done up in braids that flipped this way and that as she skipped, and her clothes looked like they had been purchased especially for this weekend stay at Simon's. Mortimer on the other hand was wearing hand-me-down jeans and his t-shirt had several small holes in it. His shoes squished as he stepped, and were falling apart at the seams.

They entered the mansion from the rear, near Simon's room, and walked down the long hardwood corridor into the entry hall. The entry hall was two stories tall and was crowned with a crystal chandelier that filled the entire ceiling. What space wasn't taken up with the chandelier was covered in large murals of the great thinkers. Einstein and Aristotle shared their wall with Archimedes and Euclid. While Shakespeare and Homer were depicted with scenes from their great works on the opposite wall. A balcony ran around the entire second floor of the hall where it joined the grand staircase that connected the two floors. Their guest rooms were hidden towards the back of the mansion somewhere on the back of the second floor. They walked beneath the open stairs to the dinning room on the east side of the hall.

In the finely furnished dinning room they found a silver tray of chicken salad croissants and a large glass pitcher of lemonade waiting for them.

"Excellent!" said Simon clapping his hands as he took a seat at the table.

Mort and Anna sat on either side of him, but didn't say anything. Simon began humming as he served the sandwiches and poured a large glass of lemonade for each of them. Anna examined the ring on her finger, and Mort glanced around at the ornately carved panels that lined the dinning room. Many of the panels displayed a large bird with a scroll. This he knew was the Hunter Family Crest. He had asked Simon on more than one occasion why the crest showed a raven instead of a bear or a dog, something more befitting the name of Hunter.

Simon had simply replied, "Ravens are smart birds. They use their wits, not brute strength when they hunt."

This seemed a less than satisfactory answer, but it was all Simon would ever say about it, so Mort had let the question be.

Simon slid a plate with two sandwiches toward Mort and set a glass of lemonade in front of him. Anna, unabashed by anything, dug right into her sandwich and took a large swig of lemonade which left bread crumbs floating in the glass. Mort's stomach growled. He had been planning on not eating anything, but where he was obviously so hungry, he couldn't help now but to start eating. They ate in silence for some time.

"When are we going to play again?" Anna asked after finishing her first sandwich, "I never get to do anything fun at home."

"Well, I was thinking about a very special puzzle, one that is not just fun, but also challenging." Mortimer's stomach tightened up again, "However, it will take some time to put together. So maybe we had just better stick to the fun games for now, eh?"

Anna nodded enthusiastically. Mortimer however, was doing everything in his power to not regurgitate the sandwich he had just eaten.

"What do you think, Mort? Should we get together next week, and try again?" Simon asked gently.

Simon and Anna both looked at him with concerned looks on their faces.

"What's the point?" Mort was quivering, "I've only won one game in the last five. How am I ever supposed to compete with her at those odds?" Mortimer had turned green and was clutching at his stomach.

"Mort, you don't look well, maybe you should go lie down," Anna said looking quite frightened by this change in color.

Mort had gone from green to purple. Simon rang a small bell and emptied the fruit bowl onto the table.

"Mort, you need to lie down. You are not well, Jared will take you up to your room. Ah here he is!" said Simon as the tall, skinny butler entered the room.

"Jared, take Mort to his room. Lunch didn't seem to agree with him. You may want to carry this under him, just in case." Simon handed Jared the empty fruit bowl and looked at Mort with deep concern. "I think I may have over done it with this last puzzle."

"Yes, sir," replied Jared with a look of slight apprehension as he took Mort by the arm and guided him deftly from the room.

The sound of retching reached them from the hall a few moments later. Simon glanced from the door to Anna and then back to the door, his face a mix of concern and shock. He stood and began pacing the room. Anna, frightened by what had just happened finished her meal in silence. When she had finished she excused herself and left the room quietly while Simon stood at the window in deep thought.

Or click here to see
other works by this author

Posted by Kendall Purser at 2:55 PM