The Puzzle of Hunter Manor- Chapter 23: The Final Clue

I hope you have enjoyed this week. Putting all these puzzles and clues in place has been quite the adventure for me and I hope it was fun for you to relive some of our past outing together.

If you have not worked together thus far, I implore you to work together now. This last clue is in two parts and neither will do you any good without the other. Solve it quickly as time is running out and you must present Mr. Henson with the final solution before midnight on Saturday!

Annabel and Mortimer looked at each other, then opened their envelopes and laid the clues out on the table next to the others. Everyone leaned in to look at the new clues

"What on earth?" mumbled Terrence.


"So there are all our symbols, but what do they mean?" asked Angela.

"The numbers!" cried Gilbert, "That's what the numbers are for!"

Everyone stared at him.

"I have to admit I'm in the dark on this one too," said Eudorra. "What do you mean Gilbert?"

"They're coordinates!" he said, but still met blank looks. "Has no one else been geocaching before?"

"Here," said Gilbert flipping through his phone once more. Suddenly there was a 'beep, beep' and Gilbert almost threw his phone in frustration.

"Dead again?" Eudorra asked. Gilbert nodded, "Well, give it here. I'll go plug it in so it can charge while you explain what Geocaching is to all of us. Wait until I get back though! I want in on this too."

She took his phone and dashed out the door. She returned a few minutes later empty handed.

"It was completely dead, so it will probably be morning before it is charged," she reported.

"Probably for the best," said Gilbert, "Wouldn't want to try and find a geocache in the dark, let alone in this rain!"

"So what is a geocache exactly?" asked Annabel.

"It is a game where people hide containers full of trade-able items all over the place. They use a GPS to mark where the container is hidden, then register the cache on a website," Gilbert explained. "If you hide a cache and don't register it on the website, then only the people with the coordinates can find it. See these marks at the top of the clues? They indicate the coordinates to find the final solution. Coordinates come in pairs, one for north/south and one for east/west."

"So how do we get the numbers then?" Mortimer asked.

"Well, I had them all on my phone, but now that is out of commission."

"That's okay, everything is in the murals," said Eudorra, "We can just track them down again!"

"Gilbert, why don't you and Eudorra take our clues," said Terrence, "and Mortimer and Angela can take theirs. When you find one, write the number underneath it on the page, then we can meet back here to find out the coordinates."

"Sounds like a good plan to me," said Angela as she gathered up their pages. Eudorra and Gilbert followed suit, and they were soon scanning the walls of the Entry Hall. It took longer than they expected, the symbols were not as easy to see in the mural as the roman numerals were. However, after some patience and a little head scratching they got all the numbers rounded up and they reconvened in the library.

They laid their symbols back out on the table, now with the roman numerals written underneath each symbol: 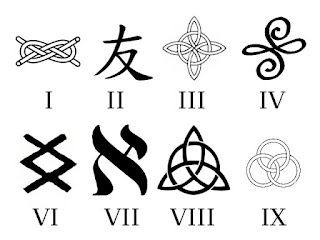 "Huh, it looks like Simon skipped the number 5 for some reason," observed Mortimer.

"Maybe he didn't need it for the puzzle," said Annabel.

"Good point, let's see what we do have," said Mortimer.

He read off the numbers to Annabel who wrote them down. Everything was going fine until they reached a symbol they hadn't received as an answer from the other puzzles.

"What is that?" asked Angela curiously. "Why would Simon use a number he hadn't given us yet?"

"Maybe he figured we could find it on our own, now that we know where to look," suggested Eudorra. "Let's go take another look in the Entry Hall and see what it is!"

So the four of them scattered back out into the hall, upstairs and down to try and find the last symbol. Eudorra spotted it near the Music Room. "Over here, I think this is it!" She called to the others.

They gathered around her and looked at the the symbol then stared at the plaque that should have told them what number it was. But all it said was 'Null.'

"Null? That's not a number is it?" said Angela speaking the same thought that was running through everyone else's head.

"Maybe it is," said Mortimer, "Null simply means, none, or zero."

"That symbol looks familiar," said Gilbert, "Like it might be in Mars Blaster, too bad my phone is dead. I could send a picture to my pal Kevin, he would know exactly where to look for it."

"Well, let's get back to the library and tell Annabel and Terrence," said Angela.

They returned down the grand staircase and across the hall to the library where Annabel sat with a smile.

"What?" they asked when they saw her.

"It's zero isn't it!" she said excitedly.

"Well, it said 'null' but we think it means zero," said Gilbert.

"Oh, it's a zero alright!" said Annabel, "That symbol is the Mayan symbol for zero, which can also mean unity."

They were all surprised by this pronouncement.

"Mom, where did you learn that?" asked Gilbert.

"Right here in this room. Simon told me, we were looking at a book about the Mayans and he told me that they were the first society to come up with a symbol for the absence of value, a zero."

"So what are the coordinates?" asked Eudorra looking down at the clues which now read:

"Okay team, meet back here right after breakfast tomorrow!" said Mortimer, "Gilbert's phone will be charged by then, and hopefully the rain will have stopped so we can find the final solution!"

It was late and everyone agreed that it could wait until after breakfast. As they wandered off to bed, Mr. Henson shook his head at them. How had Simon done it? How had he been able to bridge the gap between these two estranged cousins in the course of one week?

Or click here to see
other works by this author.

Posted by Kendall Purser at 3:26 PM