They all gathered in the Library around Annabel, who still lay on the couch near the fire. Marie and Jared brought in sandwiches and hot cocoa on a cart and served them. Annabel risked sitting up so she could eat. As everyone munched on the sandwiches Annabel spoke.

"I'm sorry I have been such a spoilsport this week," she said. "I was so determined to beat Mortimer at one more puzzle that I lost sight of what was really important. I'm especially sorry for the way I treated you, Gilbert. I should have let you be more involved from the start. I also," here she gulped and looked directly at Mortimer, "should have shared our clues from the beginning. I know there is only a day left before we have to submit our final solution, but would you be interested in sharing clues?"

Mortimer smiled and nodded, "I've been waiting for you to say that all week. It's more fun when we work together Anna, and I think Simon realized that too. It's better to keep the Manor in the family than for one of us to beat the other."

"I see that now. Gilbert, will you go get the clues off the desk in our room, please?" Annabel asked politely.


Gilbert smiled shyly, "Okay, mom. Sure thing!" And he left the room.

"I'll go and get our clues from the sitting room," said Mortimer, "I'll be right back."

"Let's pull this table over by the fire, Eudorra," said her mother, "That way Annabel can work on the clues with us."

The picked up one of the small tables by the window and set it down in front of Annabel. Then, with Mr. Henson's help brought several of the chairs over so they could all look at the clues together near the fire so Annabel would stay warm. Jared and Marie left to bring more cocoa and some dessert, while Terrence sat next to his wife and held her close. Mortimer and Gilbert soon returned with a handful of papers each and set them on the table. They each organized their clues in the order that they received them and started showing each other the puzzles Simon had left for them.

"Amazing!" said Morimer when he heard how Gilbert and Eudorra had solved the Hawk's first puzzle in the green house.

"You mean you KNEW that thing was going to spray us with water and you said NOTHING?" Annabel fixed Gilbert with a stare.

"Well, yeah, but you kind of deserved it at the time," he said with a grin. "You should have seen the looks on your faces when it started shooting water all over your feet!"

"This Chinese Puzzle Box is incredible!" said Terrence examining each piece as he put the box back together.

"A playfair cipher? Wow, I haven't seen one of those in years!" exclaimed Mortimer.

"But what about the last clue?" asked Eudorra, "Did you ever figure it out?"

"No," said Annabel, "But Gilbert said he got a good start on it."

"Yeah, I figured out the small letters on the outside are supposed to match up, so it is like a jigsaw puzzle but with letters," he said pulling two of the pieces together and setting them side by side. "Like this, so there is only one solution when every side matches it's neighbor. I had just started putting them together when Dad came into my room and ..." he let the sentence trail off.

Working together they had the puzzle solved in almost no time. It looked like this: 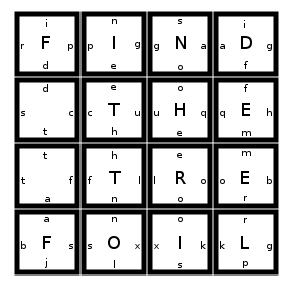 "The message doesn't end there!" said Eudorra, "Look!" She pointed to the small letters along the top of the first row "Find the Trefoil inside of the manor!"

"Sorry," said Terrence, "I still don't know what a Trefoil is."

Gilbert pulled out his phone and began tapping on the screen furiously, "Hold on! I think I've already got it," he said. Everyone stared at him as he continued swiping through the pictures on his phone. "Here it is!" he said at last.

"Where is that at?" Angela asked.

"It is on the wall in the Entry Hally near the Game Room," said Gilbert, "In fact every symbol we have recovered so far is somewhere in that mural. Eudorra found the first one outside the Sitting Room the other night before we watched the movie and she set me to find any others."

"That's right," said Eudorra, blushing slightly when her name came up, "there is a Roman Numeral underneath each one and I was curious how many there were, or if there was some pattern to them."

"They are all there, but we haven't been able to find a pattern to them yet," said Gilbert.

"Well you two certainly beat the pants off of us," said Mortimer in appreciation, "I didn't even notice those symbols were there and that mural has been there since we were kids," he said looking to Annabel who nodded in agreement.

"I wonder what their significance is," said Terrence as he stroked Annabel's hair once more.

"I think I can help with that," said Mr. Henson rising from his seat, "I'll only be a moment."

He left the library as everyone continued discussing the clues. Eudorra showed her parents the hint she had found in the encyclopedia the day they had come into the library to receive their clues. Gilbert laid out the sheets of paper with the symbols they had found and the puzzles that went with them. Mr. Henson came back carrying his briefcase once more and set it on the end of the table. He opened it while Jared and Marie began to clear the plates and mugs and pulled out one last set of clues.

He cleared his throat one last time and everyone went silent.

Or click here to see
other works by this author.

Posted by Kendall Purser at 9:33 PM